An Audi commercial in China seems to compare women to used cars, and it has sparked outrage from consumers.
USA TODAY

Several tips on what to do if you’re involved in an auto accident.
Wochit

Fiat Chrysler Automobiles has announced it will sponsor “Sesame Street” on PBS. As part of the deal, characters like Big Bird, the Count, and Cookie Monster are appearing in online commercials for the Chrysler Pacifica and Pacifica Hybrid minivans.
Wochit

The Woodward Dream Cruise said today Ford will be its main sponsor for this year’s annual cruise in August.
Wochit

These are the 5 best four-wheel drive cars for the snow.
Video provided by TheStreet
Newslook

TOP AUTO NEWSNever overpay for auto repairs with these 3 tips | 0:51

Here’s how to get a fair price at the auto shop.
USA TODAY

Questions have arisen over the safety of Tesla Model S after a serious of crash tests by the Insurance Institute for Highway Safety. Tesla refers to the vehicle as the safest car in history.
Newslook

TOP AUTO NEWSVolvo announces move to make all cars electric or hybrid by 2019 | 0:57

It’s a major shake up for the auto industry. Angeli Kakade (@angelikakade) has the story.
Buzz60 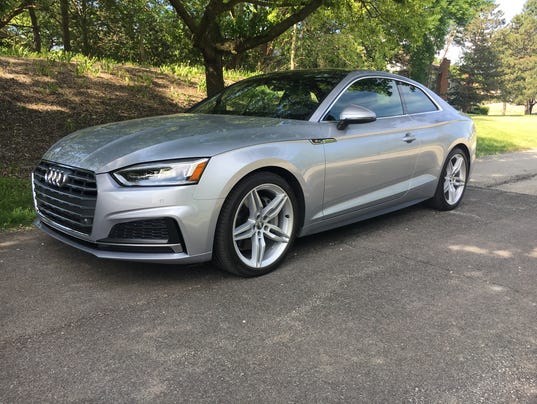 Redesigned for 2018, the second-generation Audi A5 Coupe uses a 2-liter turbocharged 4-cylinder engine mated to a 7-speed transmission to make 252-horsepower and 273 pound-feet of torque.(Photo: Robert Duffer, Chicago Tribune, TNS)

Crossovers are the anti-coupe. They’re everything a coupe is not: tall, wide, ungainly, roomy and really, really popular. The four-seat, sedan-based coupe is an endangered species and yet, like the wagon, it attracts a small but loyal following.

Audi hopes to revitalize that core with the 2018 Audi A5 Coupe. If you’re burned out of crossovers, the coupe is the antidote.

But for a one-car family, the coupe encounters problems solved by four doors and headroom.

During a weekend filled with airport runs and city shuttles, the A5 Coupe was not kind to my 6-foot-5-inch passenger. With his sister and mother in back, the coupe became comical. Watching the three of them exit the car was like slow-motion popcorn popping from the kernel of a car.

On another trip, with only one passenger, we used the 60/40 folding seats to stow our golf clubs. Had the seats not folded down, our clubs would have lost out to the cooler. Priorities.

After the weekend, when my passengers left, the A5 Coupe became everything it was intended to be: a sleek, sporty getaway car.

The second-generation A5 Coupe is leaner, longer, lower and accentuated by sexy wheel arches.

The biggest difference is under the hood and behind the wheel. The tester came with the 2-liter turbocharged four-cylinder engine that makes 252 horsepower. From a dead stop there isn’t much hesitation from the TSFI turbocharger, and it hits max torque of 273 pound-feet at 1,600 rpm. All that low-end torque means it can burst out of any traffic situation without causing much of a stir in the cabin. At highway speeds, a slight press of the throttle gets it zipping along. It’s quick and nimble, as a coupe should be.

The seven-speed S tronic transmission reads the driver’s intentions perfectly. I used the paddle shifters to challenge the S tronic, but conceded it was more fun to let it do the work.

The quattro all-wheel-drive system made for a whole lot of unexpected fun on the cloverleaf ramps. Climb from 2,000 rpm until you’re at 50 now 60 m.p.h. and then rocket into a merge quicker than you can spy flashing lights. It’s so planted and evenly balanced that some enthusiasts might want more kick from the rear. 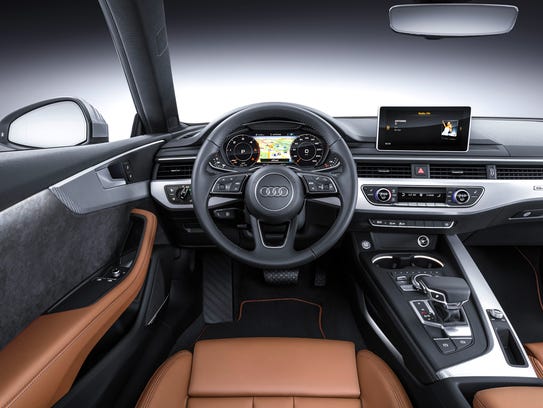 My favorite feature was the technology on the inside. It’s not unique to the A5 Coupe, but Audi’s Virtual Cockpit and MMI multimedia system is the best unit on the market, and well worth the $2,600 upcharge.

MMI uses an initially complex controller dial to toggle through the 8.3-inch display screen. There are four tabs on the interface on the console above the gear stick. After a few days, with my palm resting on the dial, I could swap between nav, radio and vehicle info without looking down. It’s less confusing than Mercedes-Benz and as intuitive as BMW. The real value is in the Virtual Cockpit.

With the digitization of everything, the instrument cluster has become the most valuable real estate in the dashboard.

Audi’s Virtual Cockpit is a 12.3-inch customizable display. There’s a speedometer and tachometer, of course, separated by a vehicle info display. Most makes have this in most premium models. What they don’t have is a “view” button on the steering wheel that minimizes the speedo and tach to the edges, so that the vehicle info takes up nearly the whole space.

Arrows on the steering wheel let the thumb walk through phone info, radio stations, trip meters and other vehicle info, or the navigation map. The 3D map display in satellite or traffic view is brilliant. Zoom in or out with the roller dial on the steering wheel. Submenus are available in limited form from what’s on the display screen.

What this all means is you don’t even need the display screen or controller dial except for the deepest dives, which most drivers aren’t going to (and shouldn’t) do while driving. In the amount of time, and with the same risk, as checking your speed, drivers can check the map or change the radio station, without taking their eyes off the road. This is the direction every automaker should go, to offer all that connectivity and info in the safest and clearest manner possible.

Why get a coupe if there’s a sedan counterpart? Why get a coupe instead of a two-seat sports car? Subtle size differences, I reckon. Coupes are more fun than sedans, but with high-horsepower low-slung sedans becoming more prevalent, as well as turbocharged crossovers with coupe-like rooflines, the audience for the true coupe is limited. But as a second car for solo commutes or weekend getaways, or as the antidote to cookie-cutter crossovers, the A5 Coupe can fill the prescription.

Transmission: Seven-speed to all wheels