SELF-DRIVING CARS5 things to know about self-driving cars in Arizona | 0:52

Tempe and Chandler have become the latest hot spots in a tech trend that aims to change commutes across the globe: self-driving cars.
Wochit

Google is one step closer to making self-driving cars a reality.
USA TODAY

SELF-DRIVING CARSHow much money could self-driving cars soon save the average family? | 1:40

Self-Driving Cars Could Soon Save the Average Family at Least $5,600 a Year
Time

A new poll from AAA finds that Americans fear riding in a self-driving car, or even alongside one.
Buzz60

The driver’s seat may be empty, but this truck knows where it’s going.
USA TODAY NETWORK

SELF-DRIVING CARSGoing for a ride in a Waymo, Google’s self-driving car | 1:58

See what it’s like to go for a ride in a Waymo, the new name for Google’s self-driving car project. Nick Oza/azcentral.com

Google’s self-driving cars were involved in three crashes in August in Chandler. All were caused by humans.

Even if large numbers of people today don’t anticipate ever wanting a self-driving vehicle, the technology is coming, and society needs to prepare for it.

That was the message from four technology experts Friday who spoke to a gathering by Arizona Forward, a non-profit environmental and business group.

Arizona Forward officials said the topic is pertinent to Arizonans now because GM, Waymo, Uber, Intel and other companies are testing autonomous vehicles in Arizona.

In the next decade, between 10 percent and 35 percent of the cars on the road are likely to be autonomous, predicts Ben Pierce, the transportation and technology lead for HDR, an international engineering and architecture firm.

“Even with a small percentage of the fleet (driving autonomous) we can get a significant amount of the benefits,” said Pierce, who is based in Ohio.

He said by 2050 at least 40 percent of the cars on the road will be autonomous.

‘It is going to be embraced’

See what it’s like to go for a ride in a Waymo, the new name for Google’s self-driving car project. Nick Oza/azcentral.com

Combined with enhanced communications infrastructure that allows traffic lights to interact with vehicles, autonomy could relieve traffic congestion by improving traffic flow. The service also could help people with disabilities, the elderly or very young get around, the speakers said.

Companies developing the technology also predict that automated cars could reduce the number of fatalities and injuries from collisions, most of which are caused by human error.

While some people are skeptical of the technology and would be reluctant to buy an autonomous vehicle today, that’s likely to change, officials said.

“I love to drive, too,” said moderator Eric Anderson, transportation director for the Maricopa Association of Governments. “If (autonomous vehicles) can make our lives better, safer and more convenient, then it is going to be embraced.”

He described testing a Tesla with partial self-driving capabilities, and the moment when he was asked to take his hands off the wheel while traveling 65 miles per hour on the Loop 101.

“I really don’t want to,” he told his passenger. Eventually he let go, he said, and the car maintained its lane and braked when traffic slowed.

“It was really an eye-opening experience,” he said. 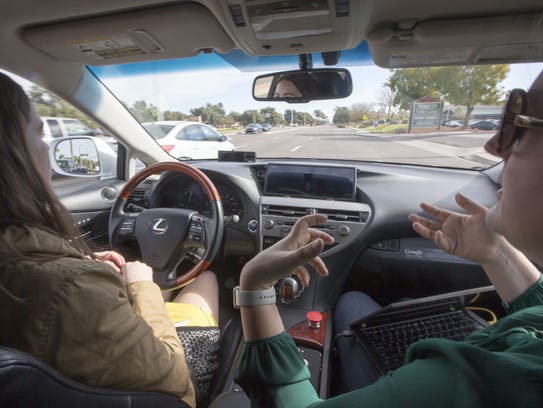 John Williams, an associate and senior project architect at Gensler in Phoenix and president of the non-profit Rio Salado Architecture Foundation, said it is inevitable that the technology becomes widely adopted. Owners only use the approximately 260 million passenger vehicles in the U.S. today about 5 percent of the time, he said.

“We have a generation that is not buying cars,” he said.

He said ride-sharing will displace a large portion of those personal vehicles, and that industry is quickly moving to autonomy.

Already his firm is designing structures, such as parking garages, with fewer parking spaces. For example, a structure under development in Denver will be built with flat parking surfaces, rather than ramps, so that the top floors one day may be repurposed into office space or some other use.

Another example is the Arizona Center in downtown Phoenix, which is being remodeled with what previously was a trash area being converted into a drop-off zone appropriate for ride-share vehicles.

He said approximately 125,000 gas stations in the country could be “reimagined” with a wholesale move to electric vehicles that recharge in public parking spaces rather than convenience stores.

“The real-estate industry will have to come to an understanding of things,” he said.

Greg Rodriguez, an attorney with Best, Best and Krieger in Washington, D.C., who advises client cities on transportation technology, said local governments will need to consider their role in helping the industry develop.

“The question is, are we setting the legal and policy foundation to get this right?” Rodriguez said.

The speakers noted Gov. Doug Ducey’s 2015 executive order that welcomed the industry to test vehicles here. The order aimed to make suggestions if needed, but not over-regulate the fledgling industry.

Rodriguez said that while the industry promises many benefits, policies need to encourage smart use of the technology so that roads don’t get more congested with single-occupancy cars where people are all “watching Netflix” while leaving public transit empty.

Waymo on self-driving cars: ‘Our eventual goal is to not need the driver at all’

Gov. Ducey taken for a driverless ride in Google’s Waymo