It sounds like Michelle Obama’s dream come true. The number of farmers markets in Massachusetts has almost tripled since 2004, to nearly 300 last year. In Boston alone, you could go on a locavore bender and hit two or three or more markets in a single outing, gathering golden beets and heirloom tomatoes, debating red Russian kale versus Tuscan kale, chatting with the fish lady and the cheese guy and the woman selling sunflowers.

Not for the farmers.

The huge growth in markets has led to a once-unimaginable situation: Too many markets and not enough shoppers stuffing fennel into eco-friendly totes. With dramatic declines in business at many markets, farmers are scrambling to make up the income.

Farmer Glenn Stillman captured the widespread feeling that we’ve reached farm-to-city-slicker saturation: “How many apples or tomatoes can a person buy?” he asked.

Although there are more farmers market shoppers than in the past — and some markets say they are seeing an increase — overall, the customers have not kept pace with the markets.

In Arlington, attendance is down by about a fifth, market manager Patsy Kraemer said. In Newton, about 1,250 people typically show up at the City Hall market, down from a peak of 2,000 in the 1990s, according to Judy Dore, the market manager.

“There are too many markets,” she said. “Everybody wants one in their backyard.”

The multiplying markets — and other siphoning factors, such as subscription-style farm shares, where customers pay ahead for a season’s worth of produce — are making farmers rethink how they do business.

Some farmers are going to more markets in an attempt to make up the lost sales, Cole said. “But it’s double the cost without double the income.”

“We used to be able to attend one market — now we have to attend two to service that same area,” said Elizabeth Frary, co-owner of Copicut Farms
, which specializes in pastured, sustainably raised livestock in Dartmouth.

Eager not to miss customers, Frary for a few years found herself sending trucks to markets within walking distance of each other — to Arlington and Davis Square; Harvard University and Central Square.

Reluctantly, she has stopped going to Arlington and Harvard Square. “We can’t be six blocks away seeing all the same faces,” she said, noting that the farm has started home delivery to reach more people.

Other farmers are dropping out of markets, deciding that money and labor spent schlepping farm-fresh eggs and sweet onions and cuts of grass-fed beef to distant markets is better spent elsewhere.

Carl Hills, a co-owner of Kimball Fruit Farm
in Pepperell, has also retrenched, in his case from 12 farmers markets to nine. He no longer sells in Belmont, Cambridgeport, or Newton.

These difficulties come at a time when farmers are already being challenged by another aspect of the markets: staffing. Farmers as a group are aging, making the exhausting business of washing, packing, loading a truck, and traveling an hour or more that much harder. But hiring temporary help is yet another cost, and there are risks of handing control of cash over to employees.

“Even some of the most honest people you know, when they see a pile of twenties, they say, ‘They’re not going to miss one,’ ” Hills said.

The growth in farmers markets is also pitting markets against one another, forcing them to compete both for customers and for vendors. In 2011, the weekly Bedford farmers market closed, in part because of competition from a newly opened market in Billerica, said Barbara Purchia, one of the market’s founders.

“They opened on the same day of the week,” she said, wistfully recalling efforts to attract customers. “We had children’s activities, we had entertainment, we had a pizza truck.”

In Brookline, where the customer count is also down, market manager Nicole Aube is also trying to be creative. Next week she’s bringing in a group selling tribal rugs and folk art. “Hopefully that will be a draw,” she said.

As she sat under a tent on a rainy market Thursday, she bemoaned the challenges for the farmers, but also looked at a bright spot. A growing number of markets, including hers, are accepting SNAP, the federal nutritional assistance program. In 2007, nine markets accepted SNAP. In 2016, 153 did, according to the state’s Executive Office of Energy and Environmental Affairs.

“It’s been great for the farmers,” said Cole, of Mass Farmers Markets. “We’re seeing a lot of customers who’ve never been to market before, which is the intended goal.”

Meanwhile, even as competition grows, farmers markets are up against an even more powerful foe: time, or rather the lack of it. Some would-be shoppers say their harried lives can’t accommodate boutique shopping.

“We’re so lame,” Kristen McCann, a working mother with 18-month old twins, said as she and her husband, a medical resident, cut through the Brookline farmers market without even stopping to smell the basil.

Whole Foods and Trader Joe’s let her buy produce and also much else she needs, she said guiltily, before naming the phenomenon that may doom us all. “I’m always multitasking.” 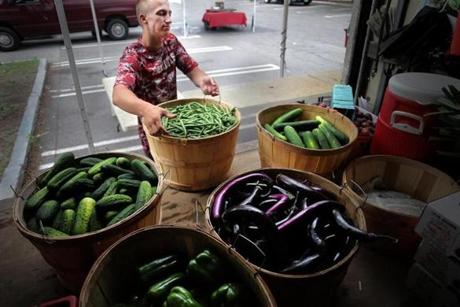 Get Fast Forward in your inbox:

Forget yesterday’s news. Get what you need today in this early-morning email.